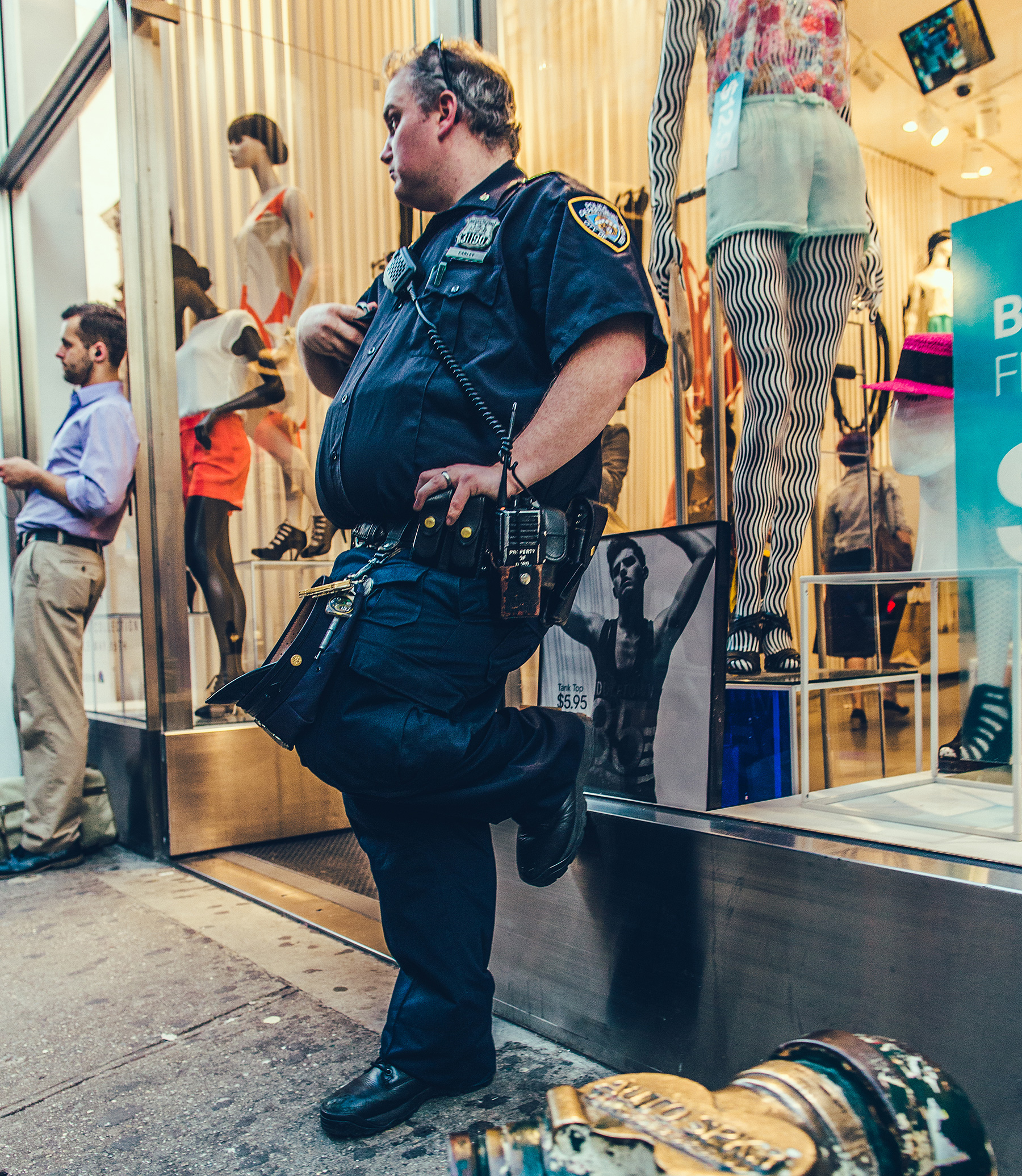 A 2014 report issued by the FBI indicated that 80% of our nation’s law enforcement officers were overweight. A further report showed that half of these overweight officers, or 40% of all officers, were obese.

Reports and research from previous years indicate that U.S. sworn officers are generally less aerobically fit than the U.S. general population. The trends since this 2014 finding have not been positive.

Police officers and fellow first responders face a unique occupational dichotomy: while the job entails intense aerobic episodes, the vast majority of the shift is spent at a desk or in a car. Consider sitting down for four hours, sprinting 400 meters, sitting down for four more hours, and sprinting another 400 meters. It’s the near opposite of an ideal interval fitness cycle. Numerous research studies have linked desk or sitting jobs to noticeably higher obesity rates.

The sedentary nature of the occupation, combined with poor eating habits, fatigue from long or irregular shifts, and psychological stress has led to disproportionate levels of obesity and body-fat among police officers. While exercise and fitness are encouraged in every police department, they are rarely compulsory. The fitness standards required of police academy cadets are rarely ever enforced again throughout an officer’s career.

A Finnish study found that on average, police officers in their nation added an extra pound to their weight with every year of service (and had lost between 10% and 32% of their muscular performance over 15 years). The problem in U.S. locales such as New York City is far worse.

The Weight of the Problem at the NYPD

The New York Post ran a 2018 expose on the massive weight problem across the NYPD. Unlike their firefighter brethren, New York police are not required to meet weight or fitness requirements after their entry into the force. The combination of lack of fitness testing and the sedentary and stressful nature of the occupation has led to a force marked by a multitude of obese officers, many without an ability to carry out basic functions in the field.

In addition to the poor public image of the police force, officers internally are concerned that their overweight peers will be unable to provide substantial professional standards:

“You see some of these officers out there: They’re fat, they’re sloppy, they’re disgusting and they’re not healthy. If you have a 300-pound partner who can’t even run up a flight of stairs. … it’s dangerous for everybody.”

The Post cited numerous examples of officer stories of partners who were unable to climb stairs or even buckle their seat belts in patrol cars. In many cases, officers had to abandon their task to assist their own partners with health issues related to exertion.

Recently, the NYPD invited officers to join a counter-terrorism unit within the department. The unit required a fitness exam for participation. The test included climbing over a four-foot wall. Many officers tested had to walk around the low wall. The obstacle course element was so poorly achieved it had to be abandoned entirely.

As the ultimate sign of weight dysfunction in the NYPD, at least one former officer applied for job-related disability pension on a claim that his weight gain (more than 200 pounds during his years of duty) had resulted in a heart condition.

The Cost of Overweight Police

Heavyset police officers are many times likely to suffer from weight-related medical complications such as heart disease, diabetes, and knee and other joint and back pain, and psychological conditions of depression and high stress. The cost to the departments in sick and leave time, injury and disability claims, and desk-assignments for patrol officers is immense.

A U.S. police officer is 25 times more likely to die from a heart attack than a police work-related death. A study out of Santa Clara County determined that the total cost to the department of an officer heart-attack was between $400,000 and $700,000 after all costs were accounted for. In an era of restricted budgets and departmental spending cuts, it’s absolutely worth considering the high costs of high weights.

Size and reduced aerobic condition and dexterity lead to all manners of diminished job performance. Overweight officers are less likely to wear body armor than their fitter counterparts, increasing their risk of death from gun-shot-wound.

In Santa Clara County, a program dedicated to occupational training police officers to reduce on-the-job sprains and strains reduced related injury costs from $3.5 million per year down to $1.0. million per year. While the training was not particular to health and fitness, results are exemplary of the possibilities for cost savings from having a healthy, fit police force. Estimate them to be massive in large departments, and substantial even in smaller, local forces.

Fitness is Being Pushed Voluntarily in Departments

While formal fitness requirements may be off-limits for veteran police officers, many departments and officer associations are making an informal push to get officers in work shape.

In Laurinburg, North Carolina, police officer Richard Tavai set up and teaches a thrice-weekly fitness class at the local community college. The class is designed specifically for first responders, for whom all fees are waived.

Laurinburg is not alone. Smaller departments across the country are urging and promoting leaders from within to push fitness and health programs for officers. Additionally, some police departments are offering awards or cash bonuses to officers who meet weight loss goals or commit to certain gym regimens.

But the conflict remains between pushing health and fitness among law enforcement officers and union contracts which prevent any such promotion by fiat. As an example, a few years ago, the Murietta, California police department excitedly announced their new CrossFit styled gymnasium available to all officers. As part of their press release, the MPD included:

“Please note: Officers are encouraged to use the gym facility but it is not mandatory by policy.”

Until management can institute health and performance standards as part of mandatory step for continued work, the cajoling and encouraging and soft-rewarded is unlikely to make a grand turnaround.